Google, in a rare move, pre-announced that they are going to be rolling out a core update tomorrow. They are calling this Google search algorithm ranking update the June 2019 Core Update and sometime tomorrow,

Google will be rolling this update out.

Danny Sullivan of Google said this specific update isn't particularly big or special, he said it is "Nothing special or particular "big."" It is just one of their regular core updates. The only reason they pre-announced it was to be nice. 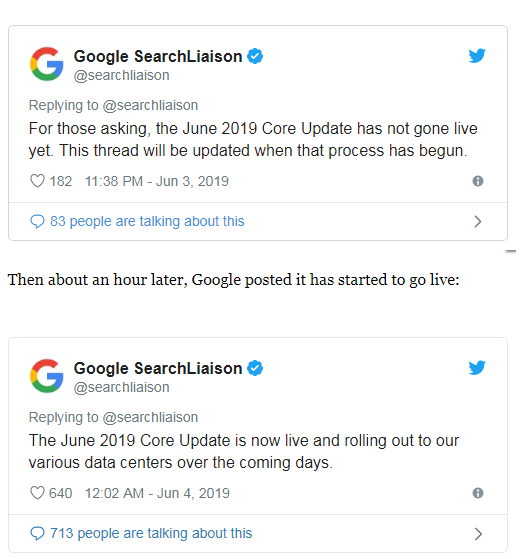 Google pre-announced this, which was rare, but they said they will be doing an update this week - a core update to the search ranking algorithms. 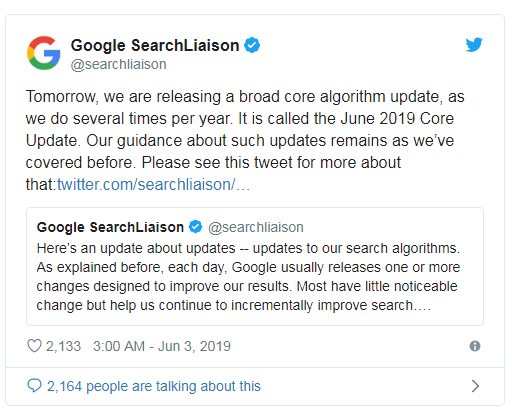 Google said "The June 2019 Core Update is now live and rolling out to our various data centers over the coming days."

It will take at least the rest of the week for this to settle down. I am sure we will see plenty of theories before then and even after. But for now, let it settle, you will see pretty soon if you were impacted by this update and then you can start theorizing.

Many are already saying, even before it launched, that this was a rollback of some sorts.

If you have any questions, please send us a request, and we will get back to you as soon as possible.

All your comments will be moderated by LPTech and responded to you as soon as we review them. Please let us know your opinion on the article above. 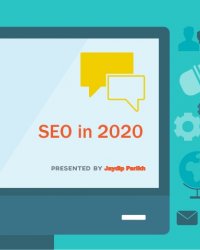 Google SEO Trends 2020 We are data driven, not guesswork driven. In our SEO mastermind, we spend more money a year on SEO tests that you...

Terms of Use LPTech Service reflect the way our business works. It describes regulations relating to the use of our services. Users when...

Privacy policy describes how we collect and process personal information when you use LPTech's services. And we are committed the best to protect...

Website Content Services are a lot of attention in recent years, you don't have a team of content staff? Let LPTech write a standard article for...

SEO services (SEO - Search Engine Optimization) is one of the key factors to affect a website's ranking on Google. LPTech is one of the...

Google SEO Trends 2020 We are data driven, not guesswork driven. In our SEO mastermind, we spend more money a year on SEO tests that you would...

Google, in a rare move, pre-announced that they are going to be rolling out a core update tomorrow. Google Update Core Search Ranking at June 2019

LPTech always puts me in the customer to understand what difficulties you are having? Businesses are now struggling to manage their website. We have not found the best and perfect partner to deliver the full responsibility for managing their website.

Website design but can not increase income as well as reliable and reliable SEO Services. We understand that, devote our dedication to being able to support our Customers in the best way.